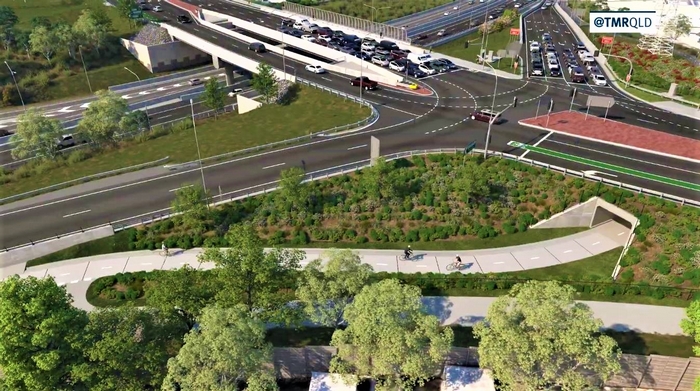 Construction works at the site of the $80-million congestion-busting Sumners Road interchange upgrade has already commenced, following a $15-million budget boost from the State Government.

Transport and Main Roads Minister Mark Bailey announced on 22 July 2019, the start of construction of the interchange upgrade that will see the existing bridge removed and replaced with two new bridges, totalling six lanes.

b and will involve construction of a bike underpass that will link up with the Centenary Bikeway and replacement of the existing roundabouts with new signalised intersections.

“More than 35,000 vehicles use this stretch of road daily and with a growing population, this upgrade is vital,” Transport and Main Roads Minister Mark Bailey said.

“This upgrade will not only tackle congestion, future-proof our roads but is also creating jobs which you will see with so many boots on the ground this week.

“I’m proud the Palaszczuk Government is delivering a record $23 billion roads and transport program for the state, creating 21,500 jobs over the next four years.

“This only adds to the more than 207,000 jobs created under our government. From the Ipswich Motorway Upgrade to the Logan Enhancement Project and now the Sumners Interchange upgrade, thousands of workers are turning up to jobs sites and building the roads Queenslanders need.”

“I’m proud that we’ve been able to secure a greater investment for the Mount Ommaney community. It means we’re now able to build a new westbound, four-lane bridge alongside initial plans for a new two-lane bridge,” Member for Mount Ommaney Jess Pugh said.

“It’s also a win for local bike riders with our funding boost enabling us to build a new bike underpass so bike riders no longer have to navigate a 750m dog leg.”

The project, Mr Demack said, will cut out the signalised crossing at Dandenong Road and make riders feel safer on the Centenary Cycleway.

Details of the Sumners Road Interchange upgrade design, which was announced in September 2018, include: